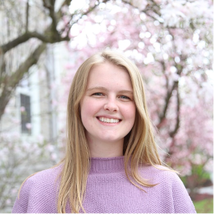 Jordan Cox
Jordan grew up in Saint Petersburg, Florida before moving to Pennsylvania for her undergraduate studies. She received her B.S. in Chemistry from Dickinson College where she conducted research with Professor Sarah St. Angelo on silver-zinc oxide hetero-nanomaterials for dye photocatalysis. In the summer of 2021, Jordan moved to New York to join the chemistry department at Columbia working with cluster-based materials in the Roy group. Outside of lab, Jordan enjoys cooking, swimming in the Columbia pool, and spending time with her kittens.
Email: jc5639@columbia.edu 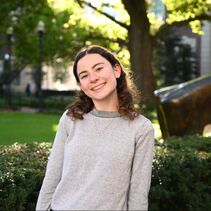 Margalit (Margo) Feuer
Margo is originally from Los Angeles, California until she moved to New Haven, Connecticut for college. She completed her B.S. in Chemistry at Yale University where she worked on transition-metal catalysts with Profs. Gary Brudvig and Robert Crabtree. Afterwards, she moved back West to work for Beyond Meat as a food developer. In the fall of 2021, she joined the Roy Group at Columbia where she works on the intercalation of 2D magnetic materials. Out of lab, catch her working on her back handspring, roller blading and thinking about carbon capture.
Email: mlf2199@columbia.edu 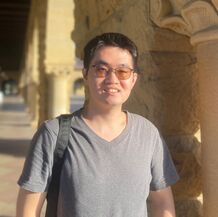 Chun-Ying Huang
Chun-Ying received his B.S. and M.S. in Chemistry from National Taiwan University, where he studied the fundamental photophysics of organic chromophores with Professor Pi-Tai Chou. Realizing his distaste for organic stuff, he moved to NYC and turned to the world of inorganic materials. Chun-Ying joined the Roy and XYZ group in the fall of 2021 as a joint student. Now he is working on understanding the magnetic and photophysical properties of two-dimensional materials. Outside of the lab, he enjoys exploring sweets (especially ones of Japanese style), concerts, and museums in NYC.
Email: ch3624@columbia.edu 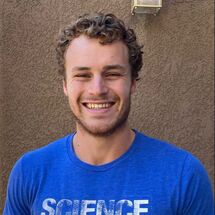 Jack Smith
Jack grew up in Newbury Park, California until he moved to the Bay Area to attend UC Berkeley. While there, he studied anionic behavior at water-air interfaces using SFG spectroscopy under Prof. Richard Saykally. He completed his B.S. in both Chemistry and Chemical Engineering in 2021. Continuing his studies at Columbia in NY, he is a joint student in the Roy and Nuckolls groups working on synthesis and characterization of doped organic superconductors. In his free time, Jack can be found on the volleyball court, playing piano, baking like a pro, or eating like a pro.
Email: jhs22335@columbia.edu 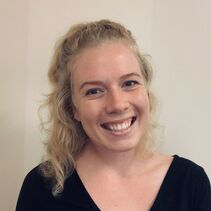 Emma York
Emma was born and raised in Santa Barbara, California before moving to Maine to complete her B.S. in chemistry at Bates College. While at Bates, Emma studied inorganic pigments and the origins of color in transition metal complexes with Professor Geneva Laurita. Wanting to continue exploring inorganic materials at the graduate level, she came to Columbia and began working with the Roy group in the summer of 2021. Outside of school, Emma enjoys rowing, backpacking, music, art, and coffee.
Email: ey2314@columbia.edu 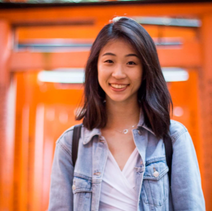 Jessica Yu
Jessica grew up in San Diego, California and moved to the Bay Area where she received her B.S. in Chemistry at UC Berkeley. As an undergraduate, she conducted research with Professor Paul Alivisatos investigating the etching trajectories of gold nanorods. Jessica left California for New York, joining the Roy Group in the fall of 2020, though she is still convinced that the West coast is the better coast. In her free time she enjoys rock climbing, animal documentaries and trying new Chobani flavors.
Email: jy3103@columbia.edu 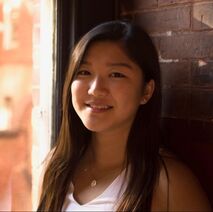 Jennifer Han
Jen is a joint student between the Roy and Nuckolls groups and joined in the fall of 2019. While at Georgetown University, she received her B.S. in Chemistry and conducted research with Prof. Karah Knope investigating tetravalent actinide-halide complexes isolated from acidic aqueous solution under conditions relevant to nuclear waste management, separations, and discerning covalency of the 5f-block.
Email: sjh2199@columbia.edu 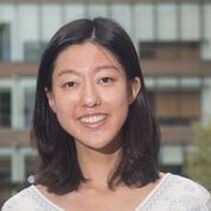 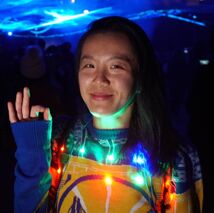 Christie Koay
Christie grew up in Dublin, California and stuck around in the Bay Area for her undergraduate studies. She received her B.S. in Chemistry from UC Berkeley, where she did research on peptidomimetic materials known as peptoids under the guidance of Prof. Matthew Francis. Looking to explore the more colorful world of inorganic chemistry, Christie moved to New York City and joined the Roy group in the fall of 2019. Her current work focuses on the synthesis of novel cluster-based materials. Outside of the lab, Christie enjoys rock climbing, watching basketball, and plant parenting.
Email: csk2172@columbia.edu 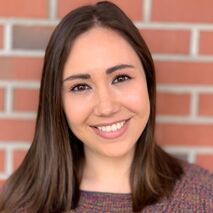 Victoria Posey
Victoria grew up in Jacksonville, Florida and decided to stay in the sunshine state where she received her B.S. in Chemistry from Florida State University in 2018. As an undergrad, Victoria researched excited-state proton transfer and dye-sensitized solar cells under the guidance of Prof. Kenneth Hanson. Looking to live in a bigger city, Victoria moved to New York to join the chemistry department at Columbia. She started in the summer of 2019 in the Roy group studying the different properties of cluster-based compounds in devices, such as batteries and capacitors. Victoria is also the recipient of the 2019 NSF Graduate Research Fellowship. In her free time, she enjoys going to the gym and exploring the city.
Email: vp2424@columbia.edu 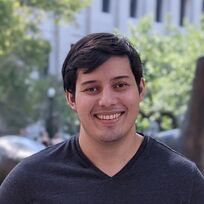 Daniel Chica
​​Daniel grew up in Jacksonville, Florida where he stayed to receive his B.S. in Chemistry and Physics from the University of North Florida. He then traversed the U.S. to Evanston, Illinois where he received his Ph.D. from Northwestern University developing flux and chemical vapor transport synthesis methods for chalcogenides under the direction of Prof. Mercouri Kanatzidis. At Columbia, he is working on discovering and studying the physical properties of novel 2D magnetic and cluster-based compounds in the chalco-halide class. During his free time, he enjoys cooking and riding his bike along the Hudson river.
Email: dgc2146@columbia.edu 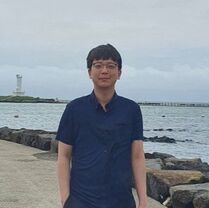 Jinwoo Kim
Jinwoo received his BS in Chemistry from Korea Advanced Institute of Science and Technology, South Korea. He then entered Professor Sukbok Chang’s group to receive the MS. He moved to the Medicinal Chemistry department of Korea Research Institute of Chemical Technology to substitute his mandatory military service. He then returned to Professor Chang’s group to continue his PhD course, studying on the high valent intermediates in transition-metal catalyzed C-H functionalizations. He is currently a joint post-doc in the Roy and Rovis groups, studying the effect of internal electric fields in homogeneous catalysis.
Email: jk4616@columbia.edu 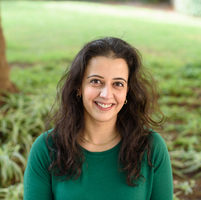 Elena Meirzadeh
Elena was born in Iran and moved to Israel at age 12. She completed her BSc at the Hebrew University of Jerusalem and her MSc and PhD at the Weizmann Institute of Science where she received the Dean's Prize and the Dimitris N. Chorafas Prize for outstanding students. During her PhD with Prof. Igor Lubomirsky and Prof. Meir Lahav, she developed an extremely sensitive technique for detecting deviations from symmetry in crystals in order to improve our fundamental understanding of crystal structure, function and different growth mechanisms. When not in the lab, she spends her time at the gym, salsa dancing, or hiking in some exotic country.
​Email: em3428@columbia.edu 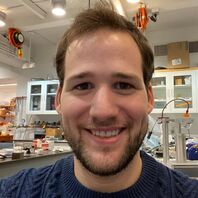 Evan Telford
Evan received his B.S. in Physics from Case Western Reserve University in Cleveland, Ohio, where he worked with Prof. Jie Shan and Prof. Jesse Berezovsky. He then moved to Columbia University to complete his graduate studies with Prof. Cory Dean in the Physics Department. His Ph.D. research focused on studying the magnetotransport properties of correlated electronic phases in heterostructures fabricated from exfoliatable two-dimensional materials.
Email: ejt2133@columbia.edu 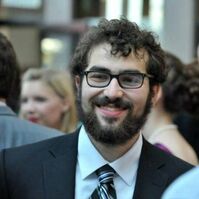 Mike Ziebel
Mike grew up outside Philadelphia and completed his undergraduate studies at Northwestern University, where he researched organic photovoltaic materials with Prof. Sam Stupp. He then completed his Ph.D. work with Prof. Jeff Long at UC Berkeley, studying the electronic and magnetic properties of metal–organic frameworks. At Columbia, Mike is a joint post-doc in the Roy and Dean groups, working on developing new two-dimensional materials.
Email: mez2127@columbia.edu 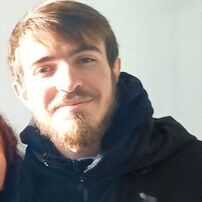 Vinicius Avelar, Columbia College '26
Vinicius was born and raised in Brazil. He works as a joint student between the Roy and X.Y. Zhu groups at Columbia, exploring coherent magnonics in 2D magnetic semiconductors. He plans to major in Chemical Physics and hopes to go to graduate school. In his free time, Vinicius likes to read fanfiction, study political theory, and listen to rock songs.
Email: vda2106@columbia.edu 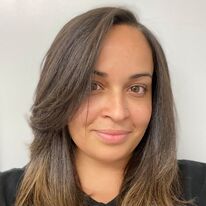 Flora Gonzalez, Columbia Post-Baccalaureate Premedical Program ‘23
A first-generation American, Flora was born and raised in NYC. After completing her undergraduate studies at CUNY Queens College and receiving a bachelor’s degree in music, she received a Juris Doctor degree from Georgetown University and set about practicing law. While exploring her interests in science at Columbia, Flora became intrigued by the synthesis of inorganic materials as one of Prof. Roy’s students and is thrilled about the opportunity to learn more.
Email: fgg2113@columbia.edu 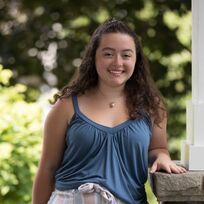 ​Claire Looney, Barnard College '24
Claire grew up in North Haven, Connecticut, and lived there until she came to NYC to attend Barnard College. She works as a joint student between the Roy group at Columbia and the Crowther group at Barnard, focusing on the surface modification of 2D magnetic semiconductors. When she's not in the lab, Claire likes to read, search for the best food in the City, and play tennis.
Email: cal2264@barnard.edu